Look back over the years at Sun Circuit’s History 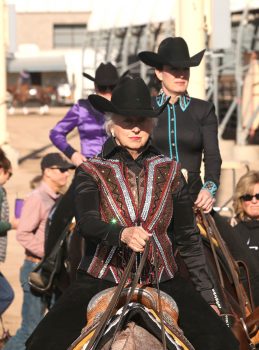 In every one of the Scottsdale Arizona Sun Circuit’s 11 show arenas, it was evident that there were more horses, more exhibitors, more friends, family and cheer leaders. The final numbers showed 2,500 stalls reserved, 300 more than last year’s record breaker. Held March 4 through March 13 at WestWorld in Scottsdale, the show delivered on its promises of fun, competitive, exciting and lucrative classes. While the biggest names in the industry were represented in everything from Cutting to Trail, there were also many exhibitors who had never shown at Sun Circuit before. There were even quite a few who chose this whopper of a show as their very first AQHA show. As one dazzled VRH exhibitor commented, “I’ve been to a couple all breed shows, but this is absolutely incredible! Everywhere you look there’s incredible horses. And even though it’s huge, everyone has been so welcoming.” That is the spirit for which Sun Circuit always strives.

Sun Circuit producer and Arizona Quarter Horse Association CEO Doug Huls added several classes to this year’s line up with the expressed intention of giving new exhibitors a place to start. Amateur Walk Trot classes in Pleasure, Horsemanship, Trail, Hunter Under Saddle, Hunt Seat Equitation, Ranch on Rail, Ranch Trail and Ranch Riding where available to entice very novice exhibitors. There was even an All Around buckle award for the Walk Trot division. Youth had Walk Trot classes as well with a buckle for the All Around Champion. Green horse pattern classes were also new, giving those horses a starting place to be shown against their peers. 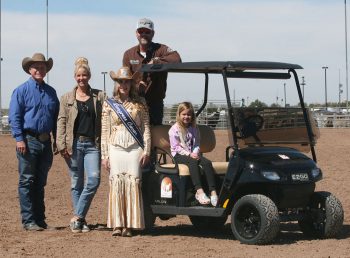 In addition to added money classes, Sun Circuit is know for a dizzying array of awards. A total of 37 saddles were given as high points, circuit and VRH awards. Best of Show awards in Open, Amateur, Youth and Select for both the All Around and Reining & Cattle divisions included Rod Patrick Boots. Non Pro High Point saddles from Bobs Custom Saddles were awarded in L1, L2 and L3. New this year in the prize line up were Sun Circuit logo’ed EZ-Go electric golf carts to high point exhibitors in five categories. Katie Green won the cart in Western Pleasure, while Beth Case racked up the points for the Hunter Under Saddle cart. Shadd Parkinson showed an exceptional string in Cow Horse to win that cart. Bud Lyon dominated the standings in Ranch classes to win a cart and Andrea  Fappani took home the cart for reining. 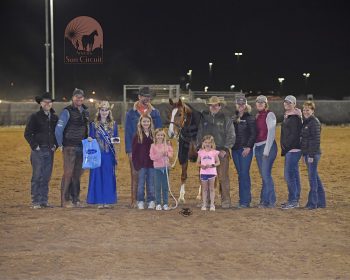 Cattle classes are always a huge draw at Sun Circuit and this year saw even more entries across the board. The Arizona Golden Cowboy award had 9 cowboys and cowgirls chasing the title. Points were tallied from Golden Cowboy Herd work, Muley Steer Stopping and Junior or Senior Cow horse. Previous winner Corey Cushing sponsored this year’s event with $5,000 added along with a buckle to the champion. It was a tightly bunched field throughout the competition, but ultimately, Shadd Parkinson riding Whose Tuff for owner Christa Hampton took top honors, winning $2,465. Shadd also claimed the reserve spot and $1,957 riding Bronwyn McCormick’s Metal Storm. Corey Cushing was third with One Shiney Metallic. 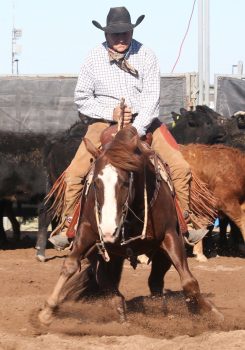 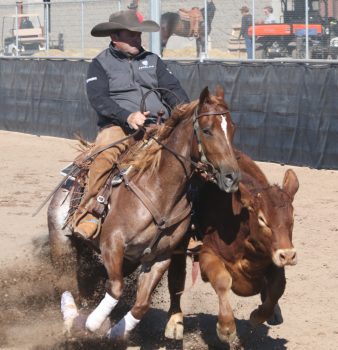 Many cattle class exhibitors were chasing the money in Cow Horse Spectaculars which combine scores from cow horse and cutting. Heaven Sent Ranch sponsored both a Junior and Senior Spectacular with $2,500 added to each. The Junior was dominated by Brendon Clark riding CR Hes A Tuff One, winning $1,290. Shadd Parkinson and Metal Storm added to their overall show winnings placing at the top in the Senior Spectacular, earning $1,080. Shadd’s rides on Whose Tuff parked him in second also for another $900.

The Amateur Spectacular sponsored by Parkinson Performance Horses paid 6 places with Hickory Smoked Ham and Brittany Factor racking up the most point to win $780. The Cow Horse Boxing Spectacular sponsored by Anchor Cross Ranch had 22 amateurs competing for nearly $2,500 paid across 7 places. Lindsay Forman and Peppys On Time was way ahead of the pack to earn $896 in first place.

The ARHFA Sun Circuit Roping Futurity hosted its largest field to date in Scottsdale across open, intermediate, limited and non pro divisions. A total of $30,000 added and high numbers of entries ensured some hefty paychecks. Eighty eight horses started out in the open heading but after three rounds, it was Hankies Version with Rhen Richard aboard who had the combination of speed and style to win the $7,760. On the heeler’s side, Sara Hudson’s horse Dual Oak E ridden by Steve Orth was the finals winner earning $10,320. Sara Hudson had a good couple days in Scottsdale because her horse Vegas Smoke Screen, ridden by Bubba Hudson, won the Non Pro Heading for $3,030. BSF Short on Coke was ridden by Quealy Probst to win the Non Pro Heeling and a check for $2,940. 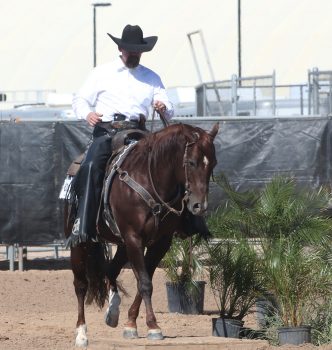 Ranch classes continue with explosive growth at Sun Circuit and plenty of great awards enticed exhibitors this year. There were Best of Show Bob’s Saddle awards in Amateur, Select and Open, plus Farnam sponsored the L1 Open Ranch Stakes with $5,000 added. Points were tallied from Ranch Riding, Ranch Trail, Ranch on the Rail and Halter. Lauren Blumer showed Charleston LK to win the championship buckle and $2,500. Lane Kail and Winn Like Flynn took second place receiving $1,500 and a saddle pad. Big and Busy with Debbie Cooper at the reins came in third receiving a bronc halter and $1,000

Added money classes were distributed across all disciplines. Thirty three horses entered the $7,500 Added Nothin But Nett 5 and Under Maiden Stakes Western Riding. It was a close race all week between Dirtie Money with Sara Simons aboard and Snippity Snap guided by Blake Weis. After 3 goes, Dirtie Money, owned by Mike and Michelle Preston, cleaned up winning $2,496. Snippity Snap won second for $2,112 For Kent Ray Taylor. 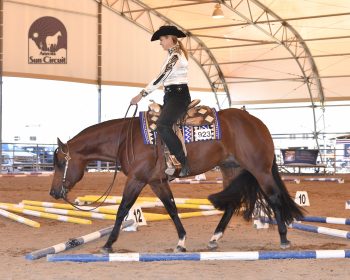 Sara had an exceptionally good show in Trail too. She rode Dirtie Money to the win in the 4 and 5 year old Machine Made Open Trail Futurity with $2,000 added. That class paid first place money of $1,257.10. On top of the cash, Arizona Quarter Horse awarded an additional golf cart to the winner. Sara rode the second place horse in the class as well. MS Extremelyhotchips, owned by Sid Karr, took home $918.65. Sara kept the paychecks flowing as she was also entered in the Super Sires 4 & 5 Year Old Open Trail with MS Extremelyhotchips, winning an additional $2,304 and prize line. I Gottem Talkin with Anthony Montes won second in the Super Sires Stakes winning $1,728 for owner Julia Oxendine. There was also a Super Sires Senior Trail class with $2,500 added. First place Champion Will Knabenshue received a check for $1,134.00 and the prize line on Party Favours owned by Kara Sisco. The 2nd place horse was VS Born To Be Good with Shannon Walker on board. Owner Laurie Rutledge received a check for $850.50.

Super Sires added money to the L1 Green Junior and Senior Western Riding with $2,500 going to each class. In addition to the cash, winners were presented with the Super Sires pries and NSBA trophy. In the Senior, a total of $3,300 was awarded. The judges’ combined scores showed it was Blaze O Rama and Shannon Walker loping through the pattern with commanding precision to win $1,188 for owner Erica Thorpe. On the Junior side, there was $3,700 in total payout. Snippity Snap shown by Blake Weis proved a great future awaits this mare after winning the top spot. The team received $1,332 for 1st place.

Sun Circuit expanded the number of classes that offered 2D jackpot money in Trail, Ranch Riding and Reining. The 2D format splits the class jackpot entries in half and money is paid to the top horses in the first D then to the top horses at the start of the mid point of the pack. At least 3 places are paid in each D. Therefore it essentially levels out two groups in one class who are competing for prize money. “I think as more people understand how 2D jackpots work in the show world, the more they will want to participate in them,” comments Doug Huls. “It’s fun. Even horses who don’t win the class can get in on the money with a modest investment.”

Dana Avila and Magnificent Dreamer picked up $662.50 in the 2D Amateur Reining as well as $675 in the 1D for Select Ranch Riding. The first horse in the second D of Amateur Reining was Mobsters Pea Eye with Abigal Anderson who also won $662.50

With 22 horses signed up to play in the Amateur Ranch Riding jackpot, there was a total of $2,100 in the pot split over 6 holes. Kimberly Colvin and Lecytic Chic Olena topped the class and won $525. While Jimmy Smith’s ride on Lil Bev At The Bar may have had him out of the points, it landed him in the first hole of the second D, likewise earning $525. It’s nice to be a L1 rider and still get to ride for money in a jackpot. Amanda Kimes on Diamonds N The Dust rode off with $537.5 in L1 Ranch Riding that had 23 horses entered in the jackpot. Always Gotyer Gun and Daralee Lindsay topped the second D.

Forty eight horses jumped on to the jackpot craze in the Senior Trail with $2,000 added for a total of $4,400 to be split. Tonya Brown guided Cool Cruzin lady through the poles to win $1,100 in the first D while Snap Chat Diva and Leslie Lange were the first hole in the second D and also picked up $1,100. Anthony Montes and Rageous Rodder won $600 in second and Leslie Lange got another $600 with Hez Kool. In the 2D Jr Trail Stakes, Suzy Johns’ Nothing But Nett with Deanna Searles in the saddle won the 1D and $712.50 and followed it with a second place finish in the 1D on Cowboy Sings The Blues for another $427.50. Made in Detroit with Charlie Cole and Couldn’t B Any Lazyer with and Michael Hoyt received their slice of the pot as the first and second place finishers in the 2 D. Amateurs enjoyed the fun too with their jackpot paying a total of $1,950 to 6 horses. Nothin Compares and Lauren Levy along with Mechanic Parkin Only and Charlotte Green each got checks for $487.50 for being the 1D and 2 D top finishers.

The Select Trail had a jackpot too with a total of $2,400 to distribute. Laina Banks won the class and a check for $600 with Eye On The Ball. With a tie for the top slots in the second D, Only One Request and Scott Reinartz and My Vital Valentine shown by June Liston split the combined first and second payouts for the second D and each got $480. 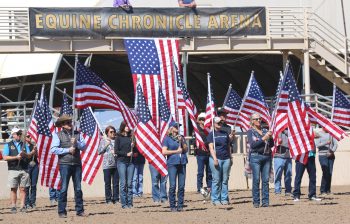 Sun Circuit was even the place for a celebratory salute to veterans. NSBA Foundation’s Heroes on Horses debuted in the west on Wednesday with military veteran riders from several therapeutic riding programs in the region participating. All the Heroes, their families and representatives from their programs were treated to a welcome dinner Tuesday night.

An emotional Parade of Heroes flag procession was followed by the western pleasure competition. As part of the NSBA Equestrians with Disabilities division (EWD), the Heroes on Horses program is a catalyst for recognition and thanks to our military service men and women who ride and compete. A 3-year commitment from the Bob and Ingrid Miller Family of Mesa, Arizona allows NSBA to bring this special tribute and competition to Sun Circuit through 2024. 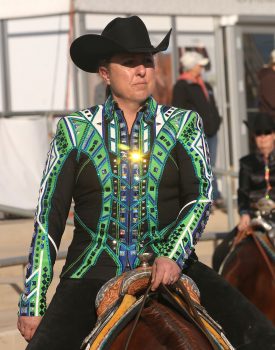 Fun and winning extends beyond the arenas at every Sun Circuit. Tens of thousands of dollars worth of TVs, electronics, along with products and gift certificates from vendor sponsors were presented by Prize Patrol for winning…or just plain playing in the fun and down right whacky games. Everything from trivia to dance competitions, egg and spoon races, snail races, reining slide offs, ballon races and scavenger hunts were entertaining across the grounds and around the barns.

Complete awards and score sheets can be found at SunCircuit.com, and all results are available on the HorseShowTracker app.

A full list of award winners can be found at SunCircuit.com